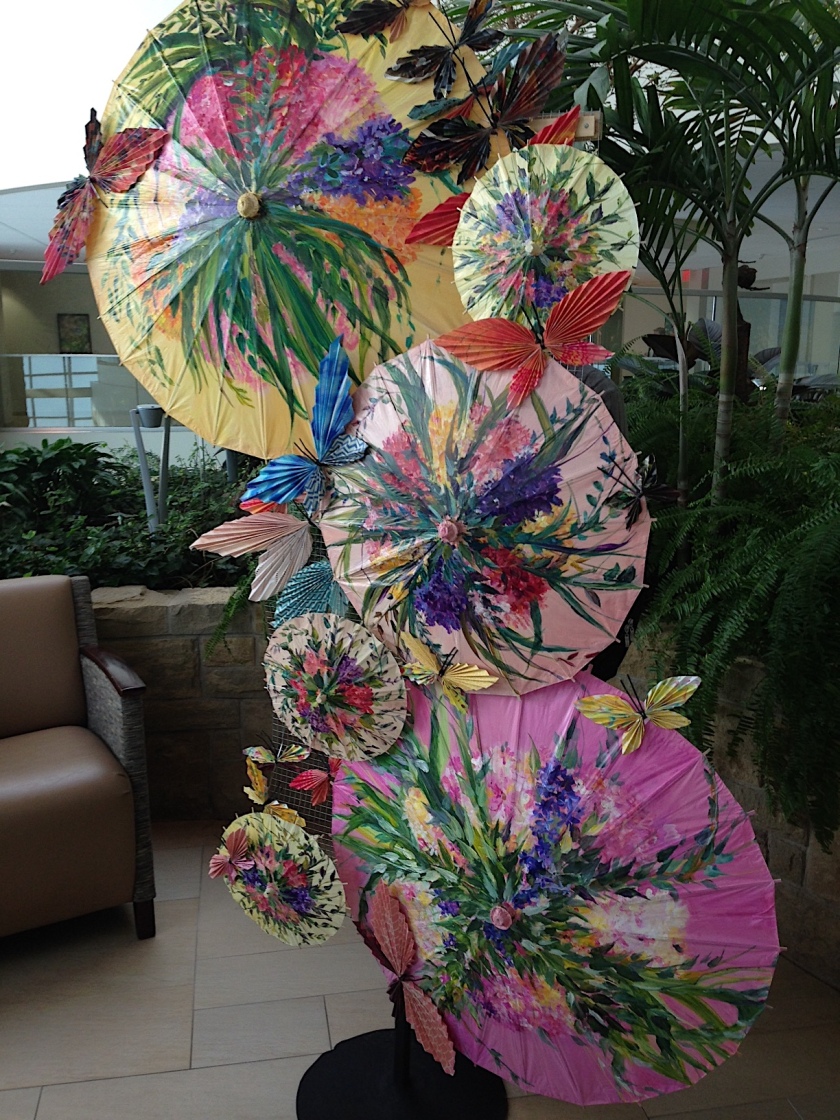 “People will come and see that a part of them is there. Patients can feel part of something bigger – instead of just going in for chemo.” — Zahrah Resh

Now I know how a caterpillar feels: I went for a visit with my oncologist and emerged a butterfly.

Unexpected defines everything about cancer. This was one of the uppers.

Having resumed normal breathing after a regular 6-month visit with my oncologist at Cancer and Hematology Centers of Western Michigan in Spectrum Health’s Lemmen-Holton Cancer Pavilion, I stopped at scheduling to set up my next appointment.

The luck of the draw took me to Chris Ackerman.

Scheduling business done, she pushed two green squares of paper toward me, and told me to write a message of hope to another cancer patient on one of them.  She would use the other to fashion a butterfly.

Never one to do as told without the “why,” I went after that first.

My message would be turned into one of hopefully 6,500 butterflies, Chris explained.

A scheduler for two years at CHCWM, Chris was roaming Art Prize, Grand Rapids’s gia-normous  yearly art show, and got to thinking about the patients she saw daily.

Many of us are too sick to make the trek to the almost 200 venues in Art Prize, and Chris said she suddenly thought, “It’s just another grief — something they’re excluded from.”

She resolved to do something about it.

About the same time, Michigan artist and gallery owner Zahrah Resh, a thyroid cancer survivor treated in Grand Rapids, was looking for an Art Prize venue.

She talked about it with Dr. Steven J. Dupuis, who specializes in hospice and palliative medicine. He introduced her to Chris.

Resh sent a proposal for her Hope, Heal, Soar project to Chris and Dr. Mark Campbell, a member of the Physician Executive Team at CHCWM, and with support and funding from Cancer and Hematology Centers and approval from Spectrum, the project took off, she said.

Come Art Prize 2017,  September 20-October 8, she will convert the Lemmen-Holton Cancer Pavilion’s lobby into a garden filled with 6,500 butterflies of painted and handmade paper personalized by patients, staff, volunteers, families  and friends of CHCWM and Spectrum Health.

There will be butterfly-making stations during Art Prize, and visitors will be able to make memorial butterflies, Chris said.

The garden will feature “trees” of dried bamboo about 18 feet high in planters and  “flowers” in the form of parasols she found in San Diego.

The project is very personal for Resh.

“People will come and see that a part of them is there,” she said. “Patients can feel part of something bigger – instead of just going in for chemo.”

Through this project, cancer patients will be included in Art Prize, Chris said.

“I hope when they see the butterflies, they will feel and sense the faith and support around them.”

Mine will be somewhere among the flutter bugs.

Its message, “Tears are the safety valve of the heart,” came to me originally through Sister Sue Tracy, my late friend, cancer veteran and long-time oncology chaplain at Spectrum Health.

As I waited for my most recent appointment, I half expected to see her flying through the waiting room at CHCWM as usual, leaving smiles and strength in her wake.

Now I’m thinking she was there after all. I just didn’t see her.

One thought on “A butterfly garden grows at Art Prize”

Coping with hope is an acquired skill — especially when it comes to cancer.

That’s what this blog is all about.

I’ve only been at this cancer business since 2009 when I was diagnosed with non-Hodgkin lymphoma. Sister Sue Tracy, the inspiration for this blog, was a 6-time cancer veteran … and  one of the funniest women I’ve ever met.

The whole idea here is to share real-life stories that may calm, support, or strengthen you as you move in and out of the parallel universe that is Cancerland.

Gilda’s Club Grand Rapids and I teaming to create a series we call Member Mondays.
Regularly scheduled the first Monday of each month, members of Gilda’s Club will share their stories of what gets them through the tough times. It will be a very personal way for those of us dealing with cancer and/or grief to share some of what works for us, and hopefully help others in the process.

Poet W.H. Auden said it best: “We are all here on earth to help others; what on earth the others are here for, I don’t know.”

Bonus points for laughs along the way.